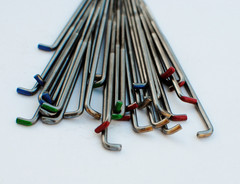 If you are a beginner to needle felting I would suggest a mixed pack of needles to learn what each can do. Once you get the hang of things its then worth experimenting with a few other needles such as the star needles, reverse needle and the new twisted needles.

Felting needles are brittle, and are therefore easily broken. To reduce (there will alway be some) breakages use the needle in a straight in, straight out motion. The needle is best not bent, wiggled or put under a lot of pressure. As a general rule if the needle will not enter a surface with ease do not force it. Possibly change the gauge needle you are using to a finer needle / higher gauge.

Uses of Each Type of Needle

These are the basic set of felting needles. There are 5 popular sizes we stock. The 32 (tip silver) is good for use with coarse fibres or as a starting needle for most fibres. The 36 (tip green) is a good starter needle for most fibres, to firm up your wool and create shape such as creating eye sockets or making a neck by needling a separation between head and body. The 38 (red tip) is a good all rounder. it is a good starter, shaping and firming you could start and complete an item with this one needle as long as you don’t have any fine details. The 40 (blue tip) can be used to continue firming after a 36 or 38 it is good for light shaping to the outside of the felted item adding fine detail such as eyes, mouth or nails. The 42 (gold tip) is for very fine detail catching a few wisps to add fine detail or to smoothen a surface.

These needles are good for pushing hair into reborn dolls as they have all 3 of there barbs at the tip. The higher the gauge number the smaller the barbs so the less hairs it will catch and push into the dolls head. The highest gauge we stock is the 46 Gauge Crown (White Tip).

This is an effects needle; it works by pulling out fibres with its barbs. This is good for fluffing the surface to create a more natural finish for felted animals. You can felt a few layers of different colours then use the reverse and create a mottled affect for interest or a more natural looking fur.

This is the latest needle in needle felting. The twisted needle is designed to create a smoother finished surface. The needle is a triangular needle which has then been twisted to spread the barbs over a greater area. The 38 (purple tip) is especially useful on flat felt to work faster and more evenly, it is also good for the mid to later stages of felting a 3D item. The 40 (light blue tip) is similar to the 40 gauge triangular but better and faster at achieving a smooth finish.

Please note the above information is only a guide. and the best way to find which needles you find most useful is to test them out. There are a sellection of mixed needle sets which may help get to started at heidifeathers.com. Also if you want to make a holder to keep your needles see the tutorial how to make a holder for your felting needles