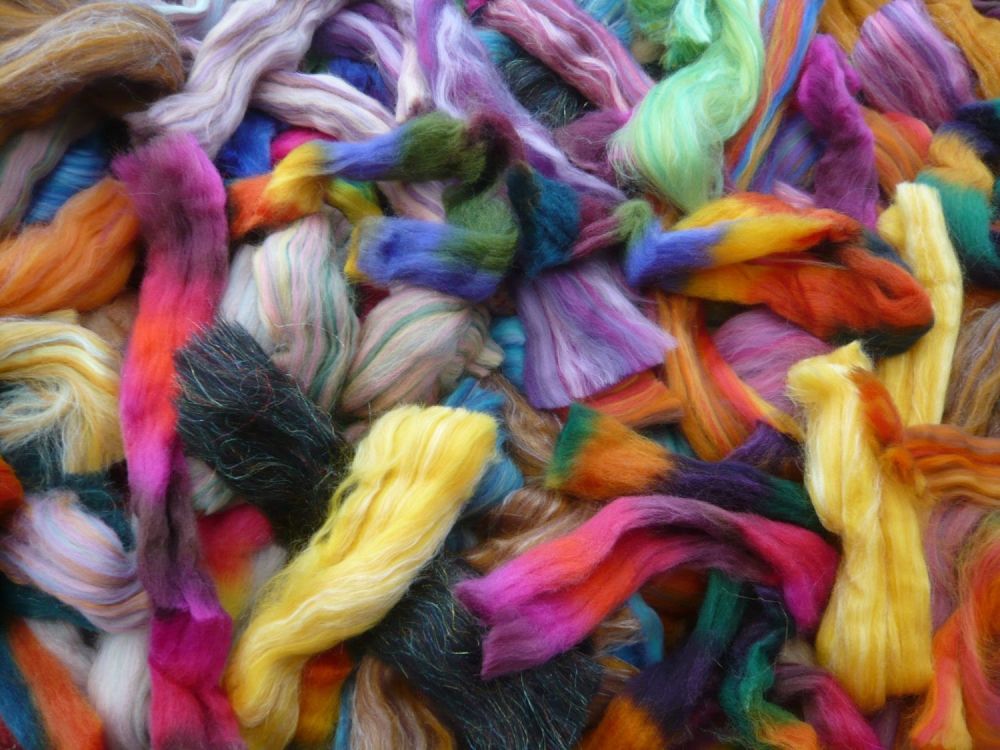 Deciding which felting wool to felt with can be confusing. Whether needle felting or wet felting there are such a large choice and types of felting wool including many dyed and natural wools. This guide explains the main categories of processed wool and common uses at each stage.

Fleece is the unprocessed wool shorn off a sheep, usually some parts of poor quality highly matted wool are removed. It will be unwashed, greasy, a bit smelly and tangled. This wool would need processing before use. 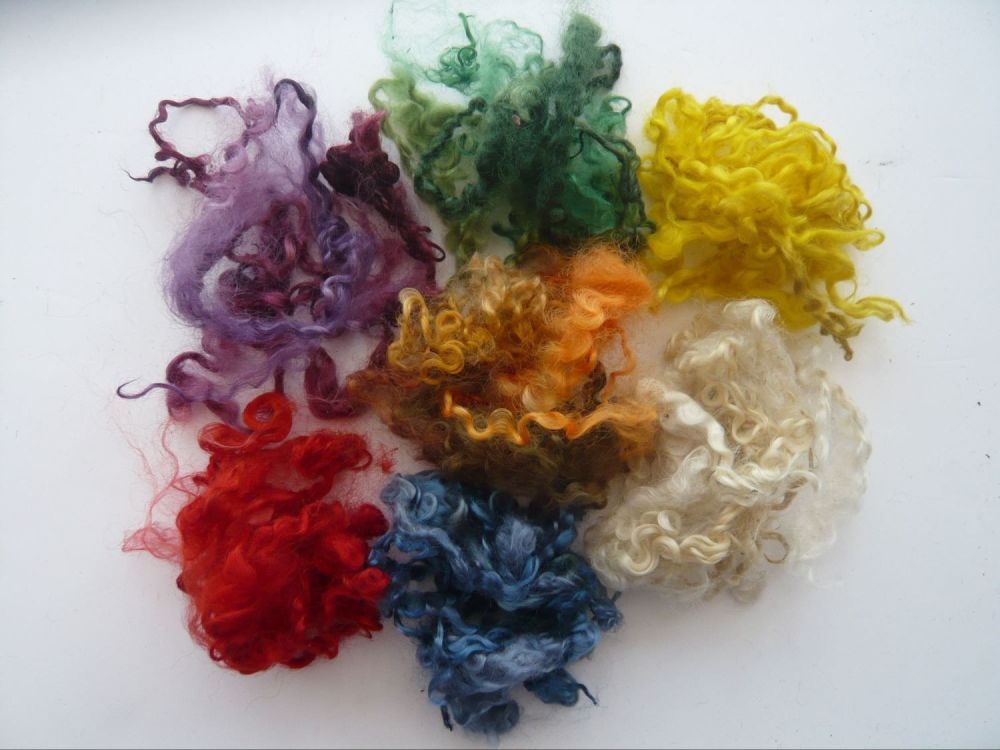 Some breeds of sheep and goats have beautiful curly locks which can be used for adding interest and texture to pieces, or using as hair for animals or fairies and so on. The locks are very gently washed to keep the curls intact. This often leaves in some of the wool grease, called lanolin and sometimes vegetable matter too, so it may require some further processing by hand before use. The locks can be sold as a section of fleece, or separated into individual locks.

The next level of processing is carding. The wool will have been washed, a process called ‘scouring’ which will also remove a lot of the greasiness (lanolin). The majority of vegetable fibers such as grass, straw, small twigs etc will have been picked out. The wool is then dried and brushed in a process called ‘Carding’, where brushes with metal teeth called ‘tines’ brush the wool between them, one brush going in one direction the other in the opposite. This removes further vegetable matter, teases and untangles, loosens curls or crimps and removes very short fibres. It will also straiten the fibres somewhat. Fibres can be carded with hand brushes or on a drum carder of varying size.

Once carded the ‘staple length’ can be measured. The staple length is the length of the wool strand lengthways. The wool strands can then be sorted in to their differing lengths. At this stage the wool is ready for dyeing if desired. The strands are also measured to sort the wools thickness. This is usually measured in ‘micron’ which is a fraction of a millimeter, but also it can still be measured with the ‘Bradford count’ which is an estimate of hanks of wool you could spin with a handful the wool.

The carding will separate fibres, making the wool lofty and soft and easy to handle. Fibres will still criss- cross so they are not all facing the same way. Carded wool can be left as fluffy clumps, or if hand carding removed from the carders and rolled into rolags which are long and cylindrical and stored ready for felting. The rolags can be gently pulled in to a long sliver by hand, known as ‘drafting’, ready for worsted spinning or for felting. The wool can also be removed from a hand carder, blending board or small drum carder with a small metal circle with a hole in it’s middle called a ‘Diz’, pulling the fibre through the middle as you slowly remove all the wool off the carding cloth leaving you with a long thin sliver. 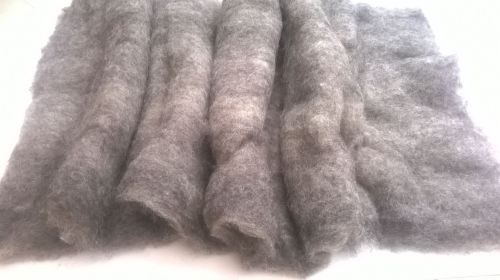 Carded wool can them be loaded on to a drum carder which compresses and combs the fibres together. Then the wool is removed in one piece as a sheet of thick, soft wool. The wool sheet is called a ‘Batt’. It is soft and airy making is easy to pull sections from or spin fromo. However it is not easy to remove in strips as the fibres are intertwined in all directions.

The wool is most commonly dyed for sale with many colours being available. Natural, undyed wool batts are often used for the middle of a sculpture, when the batts are referred to as ‘core wool’, which is useful for making animal sculptures. Each breed of sheep makes wool with varying natural properties such as micron count, staple length, the crimp or strength of fibre and feel. These properties can add to the texture and enhance the piece made from them. Batts are also good for making a base to needle felt, wet felt onto, or use to construct (quickly) the basic structure for wet felting items such as bags, placements and rugs etc.

Wool can be mixed with other wool or other fibres such as silk, bamboo, nylon etc. to gain colour, interest, strength or other desired properties. Carded batts are a great opportunity to add in a mixture of different colours of wool and other attractive fibres such as nepps or Angelina fibres to create an ‘Art Batt’ which can then be used for felting or spinning. 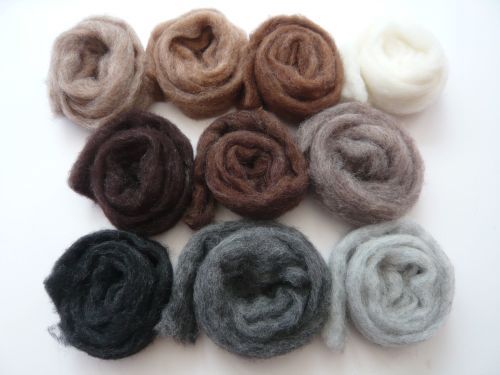 From the carded batt, the wool is removed from the drum in a continuous rope-like length. This can be done manually with a diz but when carried out by industrial machines the rope is not as thin. The carded sliver will have more of the fibres running in one direction along its length but not all do so, some with be in a mixture of directions. Sliver is similar to batts in being fast to felt with, soft and lofty but now it can also be used in lengths rather than sections (as with the batts). This makes it good for wrapping around armature wire for models or you can strip down the lengths making thinner slivers. Sliver is a good allrounder for wet felting and needle felting especially at the beginning and middle stages of construction. 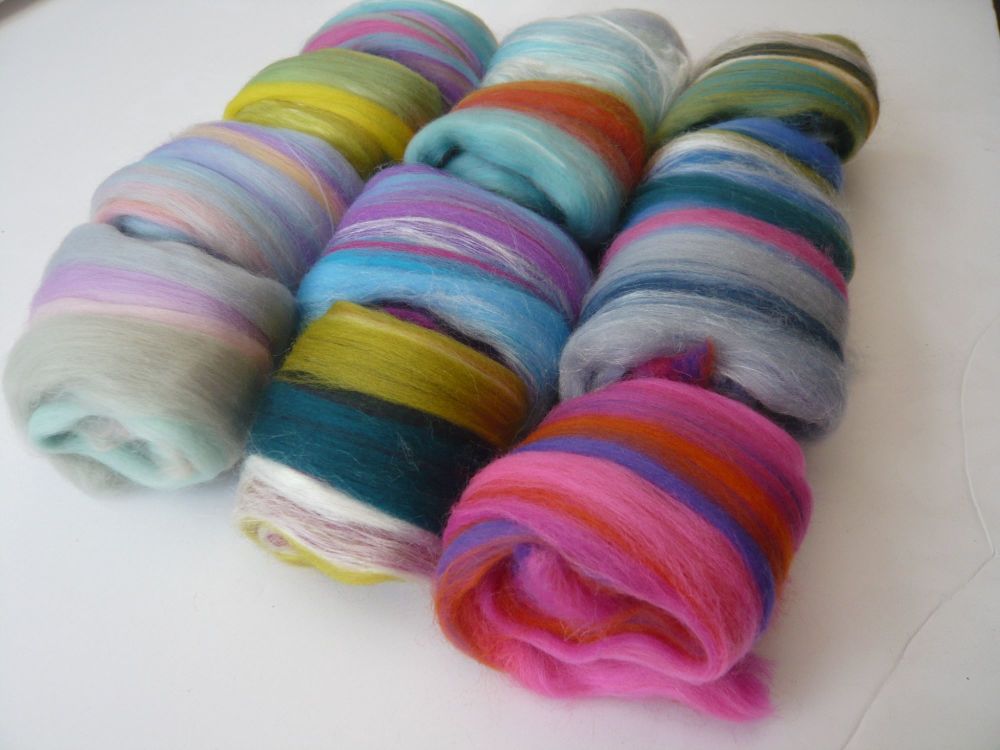 Once the wool is carded, rather than making batts it is possibly dyed then combed until all the fibres are facing in one direction. This also straightens most of the crimp or curl out of the wool creating Tops. Tops are similar to a sliver except all the fibres are combed into one direction. Tops tend to be thicker than sliver and all vegetable matter has been removed. This creates a very smooth, soft wool. It is easy to remove in strips down its length or in sections, as long as you are aware of the staple length of the fibre and leave enough room between your hands for it to separate rather than trying to snap or break fibres apart.

Merino is a fine, soft versatile wool which is commonly sold combed into tops. Wool tops is good for precision work to get the amount you want, or the top coat of wool for 3D work (often over core wool), and for hair and fur on animals. It is also easy to card and blend colours together to create new shades. It is often sold mixed with silk or a mixture of shades of wool and sometimes other fibres such as manmade fibres to add interest or sparkle.

Roving is like tops but much thinner and often has a slight twist on it ready for plying, spinning or knitting with. The term roving it also often used interchangeably to describe Tops especially in the United States.